Let’s dispense with the fluff.

We took one of our 2014 Audi A6s for a test-drive. It was a red one, with the 3.0-liter TDI clean diesel engine and Audi’s quattro all-wheel drive system. The car defies fluff.

There was nothing fluffy about John Marble, our guide and sales consultant, either. He’s been working at Audi Raleigh for the past two years. Before that, he spent nine years selling radio advertisement. In the time he’s been here, John has quickly become one of the most knowledgeable people on the premises, able to recite the features of any model in our inventory from top to bottom. When we say he’s not fluffy, we don’t mean he isn’t warm. He’s a professional, and he loves the brand as much as he loves introducing new people to it. John is the exact person you want with you on a test-drive.

When we talk about “the fluff,” we mean the features that don’t distinguish the A6 from its brothers.

You already know about the body style. The A6 was one of the first to feature Audi’s modern look, and the other numbers have followed suit, adopting slight variations on a strong theme. It’s a timeless design that stands outside trends, those that were and those yet to be. The A6 will never look like an old car. Not with its Chaplin-stache grille and the three distinct character lines that run around the car. As with people, it’s the eyes that let you see into the soul of the vehicle. Audis are recognizable for their headlights, representing the great technological vision that the automaker brings to the road, and the A6 shines bright in that tradition.

The information and entertainment features inside the car are also part of the fluff. The A6 is naturally equipped with Audi Connect, a Wi-Fi hotspot, and a host of multimedia features that you’ll know all about if you’ve read our other test-drive reviews. Navigation, Bluetooth, Satellite radio and so on are all present. Audi’s system is extremely intuitive, and the retractable info screen is a huge plus for those of us more interested in driving. There’s also an option for the Bang & Olufsen sound system for a high fidelity listening experience. The fluff will sound beyond great if you’re willing to shell out for it. Like we said before, John has done his homework, and if you need any help learning the ins and outs of the car’s technology, you want him in the passenger seat to show you what’s what. 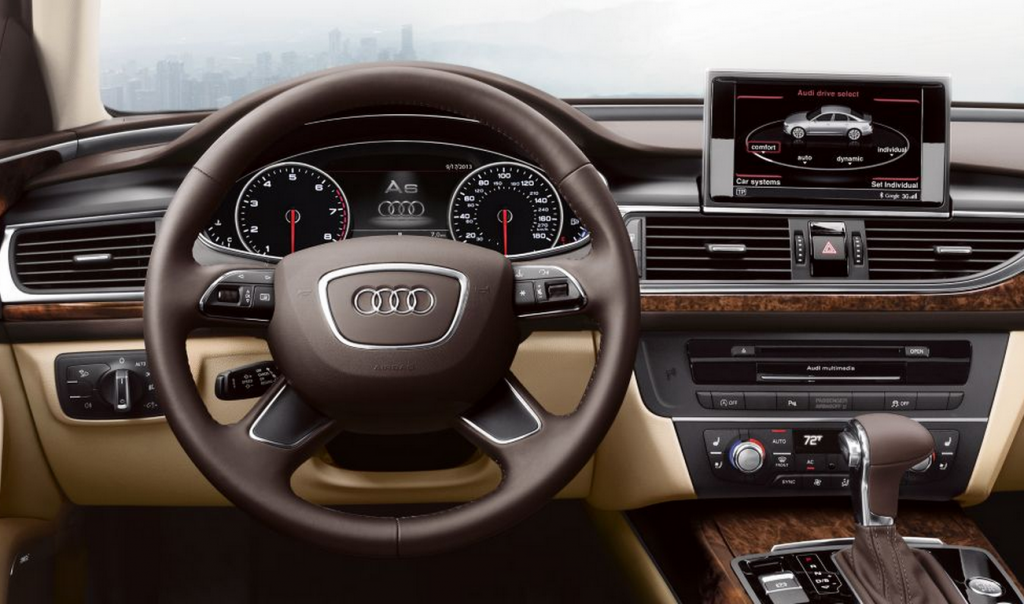 The A6 we drove was parked on the pad, so it made sense for John to take first turn at the wheel. Audi has one of the better backup cameras in the business, and it was helpful in backing off of the perch. Just shift into reverse and the rear view will show up on screen. The blue lines represent where the car will be, and the yellow correspond to the angle of the steering wheel. Front and rear sensors will beep like in other cars when you get close to something, but in an Audi, they also have visual cues – red lines that flash on screen when an object is getting close.

John also touched on the electronic parking brake, the auto-folding mirrors, the ventilated seats, and a couple of other cushy features before he pointed the A6 toward the exit of the parking lot. It was here he asked for our permission to show us what the car is capable of. We weren’t aware that he needed any such blessing, but we encouraged him to be earnest. He took a right turn at the stop sign and put his foot on the accelerator, and that’s how everything in our pockets wound up on the floor.

As we discovered, the bends in the road that connects all the dealerships in the auto park are exceptional learning curves for the quattro system. Engineered on the truth that four is greater than two, Audi’s permanent all-wheel drive technology sends power to the wheels that have the greatest need of it. Under nominal conditions, sixty percent of the power goes to the rear wheels and forty percent is sent to the front. In other circumstances, such as on a tight corner, or in snowy conditions, or when one wheel is going over gravel, the ratio is adjusted. The transition is smart, seamless, and safe. If you notice anything, it will be the absence of a struggle as the Audi remains centered in the lane, unerring in its grip on the road. 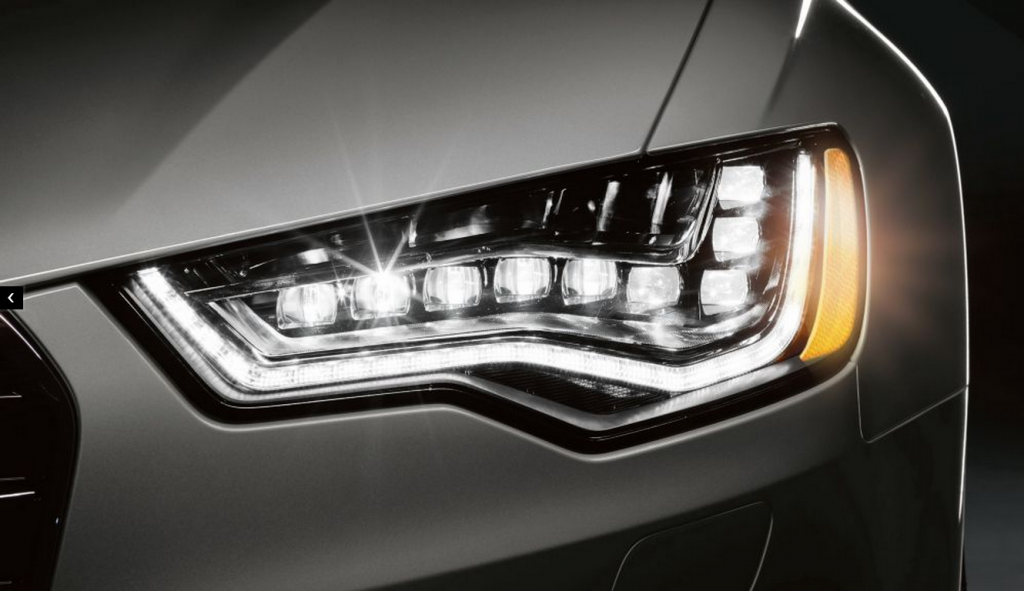 John approached the first curve, saying “Most cars will brake as they’re turning. In this car you want to brake before the curve.” He did that. “Then, accelerate through.” He gave the car some gas as he began turning the wheel. “And here we go,” he finished coaching. We aren’t sure why we bothered putting the things back into our pockets because they were vacated again at that point. On the second and third turn, we opted to just hold our personals in our lap.

To his credit, John was quick to relinquish control. Some sales consultants will spend half of a test-drive behind the wheel, while others are reluctant to give you a turn at all. Our guide pulled a quick U-turn at the end of the road, showing off the A6’s turning radius, and then doubled back to the dealership so that we could switch seats. When we got in the driver’s side, we took a moment to adjust our seat, mirrors, and steering wheel, then buckled up and put the car in gear.

“Before we hit the road, I want you to pull up outside the showroom,” said John. We followed his instructions and pulled up head on so that we could see our reflection staring back at us. It was clear why John had asked us to do this: The headlights were on and staring back at us. The LED running lights underscore the bezels during the day time hours and they look stunning as is, but our Prestige package was fitted with full LED headlamps. We turned those on and the car’s reflection was even more dazzling. Driving at night in an A6, diamonds guide you through the dark.

We were eager to follow John’s example. He even encouraged us to push the car further. The first turn we took tentatively, the second we pushed a little more, but by the third we were braking before, accelerating through, and going.

Though this A6 is a diesel engine, we kept forgetting that’s what was under the hood. When it’s a turbo-charged six-cylinder engine that generates 240 horsepower and 428 pound-feet of torque, you’ll probably be asking what the difference is in the first place. The TDI is all about more for less. You can thank Audi’s clean diesel solution for the extra torque, all while reducing your fuel consumption and CO2 emissions. Why aren’t diesels more common if they lend themselves to better performance? Our best guess is that it’s still a branding thing. Too many people still think about Mack trucks and black smog when they hear the word diesel. This is the twenty-first century, though. Audi has cleaned up their act.

The A6 accelerates effortlessly. There’s an eight-speed Tiptronic automatic transmission, and while you feel the gears switch, you don’t have to worry about them at all, unless you want to. We had passengers in the backseat of the car and it still never felt sluggish, so we can only imagine the pickup on a solo drive. Sport mode can tighten up your steering and lower the threshold between gear shifts, and paddle shifters let you change gears at will, but standard drive was more than enough for us. Also, the A6 has four-wheel disc-brakes, so you have plenty of stopping power for however much momentum you build up.

We got plenty of highway time on this test-drive, allowing us to weave through traffic. It’s important to pay attention because even a light tap on the accelerator will shoot you forward, and then suddenly you’ll be going twenty miles-per-hour faster than you were a half-second earlier. John took a moment to draw our attention to Audi’s Side Assist system. The yellow indicators on the inside edge of the side mirrors will light up when a car enters your blind spot. If you flick the turn signal in an attempt to make a lane change while the indicators are lit, they’ll flash, warning you against lateral movement. Side Assist is visual only. There’s no auditory intrusion. In our opinion, Side Assist is more effective and less annoying than competing blind spot monitors. Still, if you don’t like it, a switch on the door shuts it down.

As an aside, we had difficulty demonstrating the Side Assist’s functionality because we couldn’t slow down enough to actually hold someone in our blind spots.

When we finally got off the highway, the back road portion of our route let us decompress and enjoy the steering of the A6. Power steering makes turning effortless, so people who prefer driving with their fingertips will feel very at home in this car.

On the final approach to the dealership, we couldn’t resist pushing the quattro around those three corners again. Given the chance, we could live on those turns.

John told us that Audi has always been a great brand. For long time fans, it’s been a great experience watching these cars grow and riding along while the company pushes the boundaries of driving technology. Not just the fluff you take for granted in your center console, but systems like quattro all-wheel drive, Tiptronic transmission, and TDI. For newcomers, the cars they find in the showroom now are sure to inspire lasting loyalty.

The A6 is a whole lot of car, especially with either of the 3.0-liter engines. Even with the 2.0-liter, you’ve got a lot of power in your grasp, but if you want the space as well as the full bulk of Audi’s engineering excellence, you will be thrilled with the 3.0-liter TDI. So will your wallet with all the money you save on fill-ups. Take our word for it: Come test-drive an A6. You’ll be a believer by the third curve.

We want to thank John Marble for all the knowledge and personality he brought to our test-drive experience, and the rest of the hard-working staff at Audi Raleigh for making it possible.